Skip to content
Yesterday on our way to the Loving Arms site, we stopped at a local hardware store, known as a ferreteria, for some parts. At first, we had to explain to our driver, Minor where we wanted to go. Minor doesn’t speak English and we don’t speak Spanish. So we got out our Google translate and gave it a shot. Sure enough we got the message through. 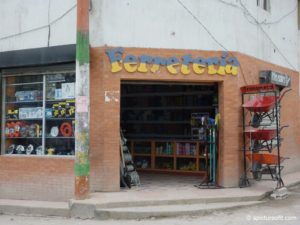 The ferreteria is like most hardware stores in the developing world, all of the parts are displayed on the wall. You either point at what you want or describe it to the clerk. That gets challenging when you don’t speak Spanish, the clerk doesn’t speak English, your driver doesn’t speak English, and the part you are looking for isn’t on the wall. We were looking for a round keyhole saw. After several failed attempts to describe it in English we resorted to a sketch. As rough as it was, we found success and rode away with a brand new keyhole saw.
We finished up cementing and began running water lines. We had a minor set back when we accidentally put a hole in one of the existing water lines, but with three plumbers around, that was fixed with almost a wave of their hand.
At lunch we were served a drink that looked like milk but tasted like vanilla and coconut. Very unusual. After dinner, with no cake, and no rain in site, we made our trek through the city for some gelato. I had salted peanut butter and the other guys had lemon. They sure know how to make gelato in Guatemala. Today we stop at the ferreteria again to work on our Spanish.
John F.